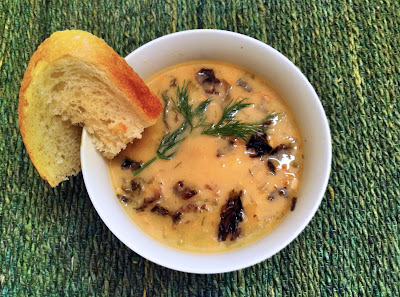 2010 saw the largest spawning of sockeye salmon in over a century in B.C. Over 35 million of them did the deed.

This came after a disastrous 2009 when only 1 million sockeye spawned. Things were so bad that year that the government held a judicial inquiry into the decimation of sockeye salmon stocks in British Columbia, gravely warning that they were soon to become extinct.

We had our fair share of fresh sockeye last season, served in as many ways possible. Fish were so plentiful that we bought them right off the boat, less than half a mile away from home.

A friend gave us some home-canned salmon from the local catch. With the weather now cold, a hot chowder was a good way to relive memories of summer.

Directions:
Place broth and flour in slow cooker. Whisk until flour is completely dissolved. Mix in potatoes, corn, onion, celery, garlic, wine and some of the dill. Cover and cook on low for 4 hours or until vegetables are tender. Transfer soup to stove. Mix in salmon, cream, lemon juice and zest. Add seasonings and more dill to taste. Cover and cook for an hour. Sprinkle servings with crumbled seaweed. Serve with sourdough bread and butter.
Posted by charles