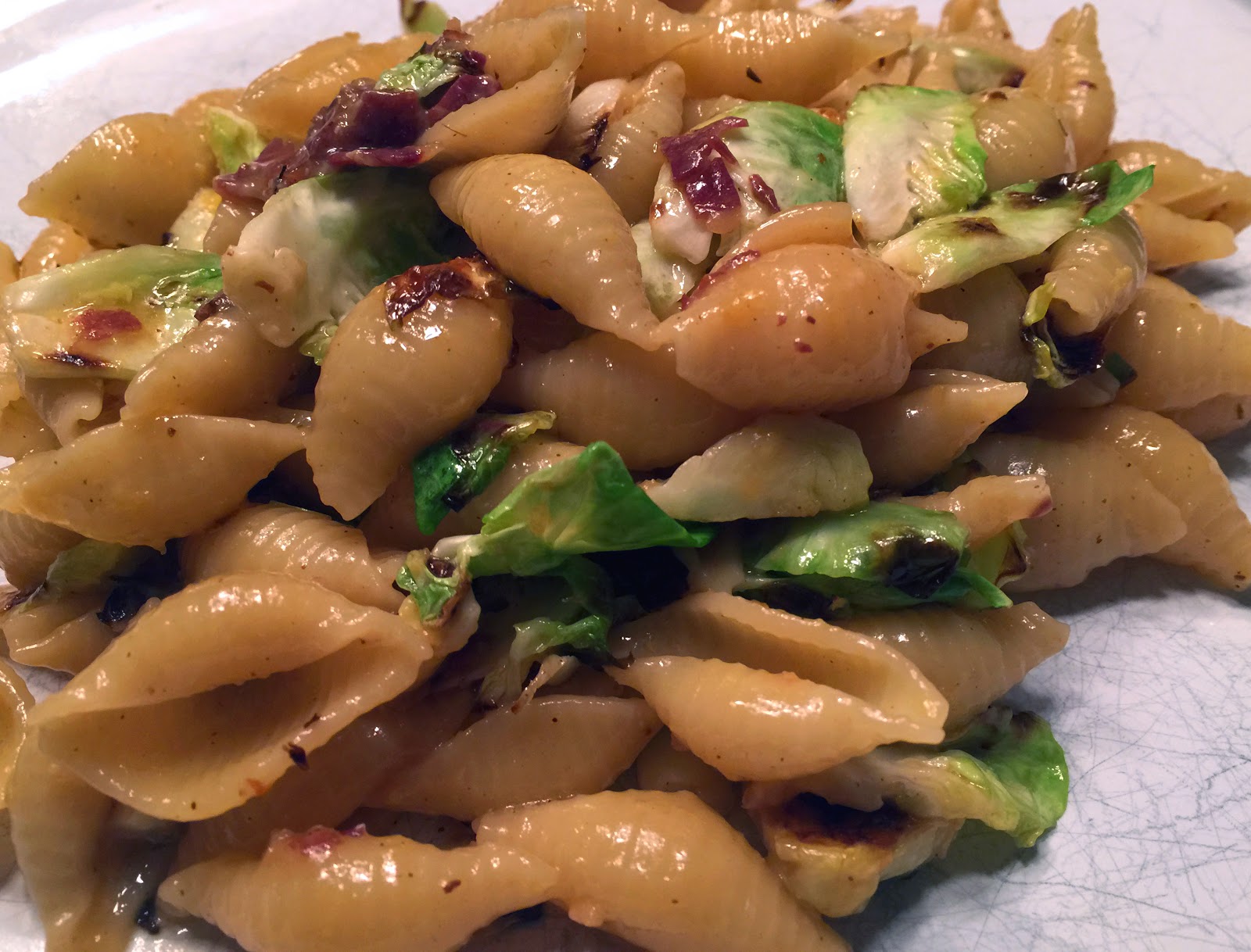 Food fads are often just cruel jokes. The people who decide these things are probably having a good laugh after having made kale the darling of the vegetable world.

I recently spent a few days in Los Angeles, and I swear, every restaurant I went to featured brussels sprouts as a stand-alone appetizer or small plate item. Gone are the days when your mom just boiled this poor little cabbage wannabe. The creativity of hipster chefs has put the lowly sprout into the spotlight.

Normally I'm not a big fan of creamy, Americanized carbonara dishes, but this recipe stands out and uses brussels sprouts in a way I'd never thought of before.

Heat 1 Tbsp. oil in a large skillet over high heat. Working in batches, add brussels sprout leaves and cook, tossing occasionally, until charred in spots and crisp-tender, about 5 minutes; transfer to a plate and set aside. Wipe out skillet.

Posted by charles No comments: 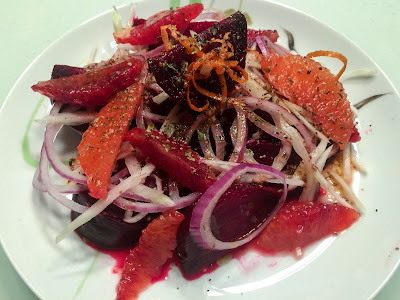 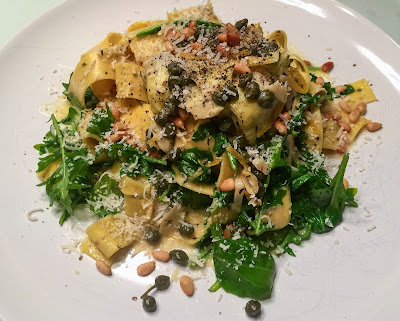 It's been a while.

Though I still cook, I've lost touch with the original premise on which I created this blog: the idea that cooking is my zen zone.
Life became really rushed these last two years, with little time to catch up on writing or other hobbies.
It's also been easy for me to take a backseat to being creative in the kitchen, as I'm lucky to have two other great cooks in the house, one of whom is the star student in culinary school.
Right now, we're on a 30-day vegetarian diet. There are tons of ways my Vietnamese family can make you not miss meat and fish, but for a Westerner like me it's more challenging to come up with meals that don't make you miss the protein.
Fortunately, my love of rustic ItalIan cooking is able to provide inspiration. This meal everyone saying, "I'd eat that again for sure!"
For the salad:
Ingredients:
4 medium red beets, tops trimmed
3 blood oranges
1 medium Cara Cara orange
1 tablespoon fresh lemon juice
1 tablespoon fresh lime juice
1/2 small fennel bulb, very thinly sliced crosswise on a mandoline
1/4 red onion, very thinly sliced on a mandoline (about 1/3 cup)
Good-quality extra-virgin olive oil
Dijon mustard
Coarse sea salt, such as fleur de sel or Maldon sea salt
freshly ground black pepper
Directions:
Preheat oven to 400°. Wash beets, leaving some water on skins. Wrap individually in foil; place on a rimmed baking sheet and roast until beets are tender when pierced with a knife, about 1 hour. Let cool.
Meanwhile, using a sharp knife, cut all peel and white pith from all oranges; discard. Working over a medium bowl, cut between membranes of 2 blood oranges to release segments into bowl; squeeze juice from membranes into bowl and discard membranes. Slice remaining blood orange and Cara Cara orange crosswise into thin rounds. Place sliced oranges in bowl with the segments. Add lemon juice and lime juice.
Peel cooled beets. Slice 2 beets crosswise into thin rounds. Cut remaining 2 beets into wedges. Strain citrus juices; reserve. Layer beets and oranges on plates, dividing evenly. Arrange fennel and onion over beets. Mix reserved citrus juices with Dijon mustard and olive oil, then drizzle salad generously with dressing. Season to taste with coarse sea salt and pepper.
For the pasta:
Ingredients:
3 large garlic cloves, thinly sliced
Zest of 1 lemon
1 tablespoon butter
1 tablespoon olive oil
1 cup chicken or vegetable broth
1/4 cup cream
1/4 cup capers
1 can baby artichokes (Trader Joe's)
Salt and freshly ground pepper, to taste
Thyme
1 8-ounce package Trader Joe's Lemon Pepper Pappardelle Pasta
Directions:
Slowly cook the garlic and lemon zest in the butter and oil, in a heavy sauté pan over medium heat. Stir frequently to keep the garlic from browning. When the garlic is soft,  add the broth and turn the heat to high. Simmer until reduced by at least one half, and add the cream and capers. Add the artichoke hearts. Season with pepper and thyme and a bit of salt (watch out; capers may have already been salty). Turn the heat back to medium and simmer until thick and syrupy.
Meanwhile, cook the pasta according to directions (2 quarts of salted water, 8-10 minutes). Drain and toss with a dribble of olive oil. Pour the cream sauce over and toss. Serve immediately.
Posted by charles No comments: 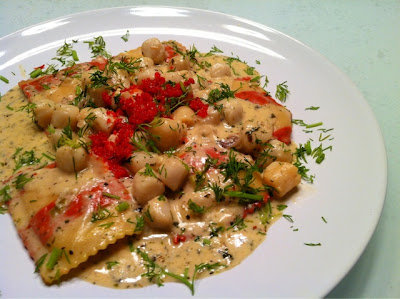 I'm getting ready for a run to the border. Almost out of Trader Joe's rations. Vancouver has almost become civilized: We've had H&M and Zara for a few years, and thankfully we got a CB2 about a year ago. Crate & Barrel is set to open here next week. We're even getting Target in a few months!

But my dear Trader Joe's eludes us. I seriously doubt they'll ever come to Canada. How can they offer such quality product at such low prices here? Taxes and tariffs and government bureaucracy surely will keep them out.

Of my remaining TJ's stash, I found a package of lobster ravioli in the freezer. The delicate, sweet taste of lobster in the ravioli works well with the richness of cream and tang of goat cheese in this sauce.

Sweat the minced shallots in butter, add chopped green onions and sweat for a few more minutes. Then add wine and allow to reduce for about 10 minutes. Last, add some heavy cream and mix to emulsify. Add goat cheese, then add scallops.

Meanwhile, cook ravioli. When they float to surface of water, remove and add to the sauce. Serve with chopped dill and red caviar.


Posted by charles No comments: 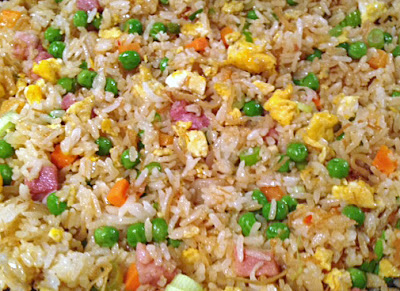 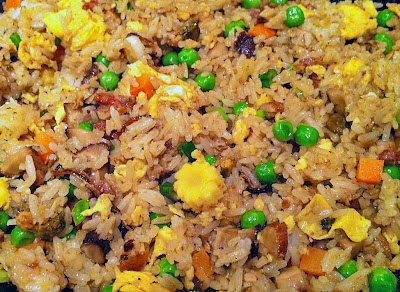 Gwai Lo (鬼佬) -- Cantonese slang for Caucasian -- literally means "ghost man" in Chinese. It’s sometimes translated into English as foreign devil. Although some consider it an offensive, racial slur, I like it.

I had an ex who was Chinese but wouldn't let me cook Chinese food. He much preferred my non-Asian dishes; to him, they were new and different. I guess for him it was the same reason I liked his culture -- same but opposite.

Fried rice is a staple of Chinese diets, but something I've never tried to make until recently. As a gwai lo, who was told not to cook Chinese, I guess the thought of making it was always kind of intimidating to me.

But now I've found that it's incredibly simple, almost foolproof. I've found the secret to making good fried rice is all in the egg. It should be cooked in the wok first, and always in an even crepe-like solid. Once formed, break it apart into pieces while still in the wok, then remove from the pan.

A basic recipe for fried rice that can be added to according to whatever you have available:

Directions:
Wash and finely chop the green onion. Lightly beat the eggs with the salt and pepper.

Heat a wok and add 2 tablespoons oil. When the oil is hot, add the eggs. Cook eggs in a single layer, rotating the wok to ensure it is even. When it has set, break the eggs apart into pieces and remove.

Add 2 more tablespoons oil. Add any meat ingredients, then vegetables, then the rice. Stir-fry for a few minutes, using chopsticks or a wooden spoon to break it apart. Stir in soy sauce or oyster sauce as desired. Add green onions. 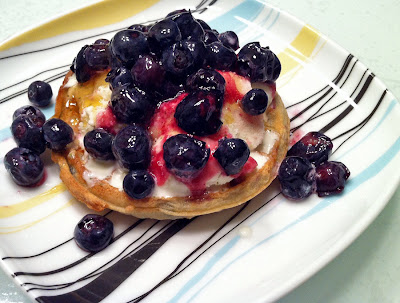 I’ve mentioned before that my friend Tom has a Meyer lemon tree growing in his backyard in Florida. It’s quite a prolific bearer of fruit – he and Julie usually end up with more lemons than they can consume or give away.

A couple of weeks ago Tom sent a bunch of lemons to me. The cost of shipping by FedEx must have been crazy high, but I was delighted to get them and we've enjoyed their sweet, juicy flavor and the thoughts of sunshine they elicit in our otherwise rainy Vancouver winter.

Despite the gloomy weather, ice cream is always in season here. Making use of Tom’s lemons, I improvised a recipe that makes use of fresh mint and is refreshingly on the tart side. The summer mood was enhanced by serving it with locally grown blueberries, purchased last summer and frozen for just such a time of need.

Transfer liquid mixture to a bowl and stir in half-and-half, adding the salt, lemon zest and mint. Pour into ice cream maker and let it do its thing.

Posted by charles No comments: 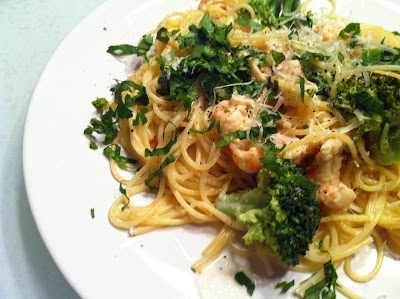 Pity the poor langostino. It surely must suffer from an identity crisis.

Mistakenly marketed as “mini lobsters,” the lowly langostino is not of that lineage. And though the word “langostino” means “shrimp” or “prawn” in Spanish, this poor little creature isn’t a member of that family either.

Contributing to the confusion, when cooked the langostino does resemble shrimp meat and has a sweet delicate flavor like lobster. But it looks more like a short, crinkled crawfish, brandishing a pair of front pincers that are longer than its body.

Truth be told, his miscatagorized crustacean is actually a member of the crab family. Its closest relative is its fellow gastropod, the hermit crab.

Rarely found in stores, Trader Joe’s in the US stocks frozen langostinos. Every time we’re in the states, we stock up on these delicious morsels of goodness.

Directions:
Bring pot of water to boil, add salt and the chopped garlic to boiling water. Blanch broccoli for about a minute, then remove from water and drain. Add pasta and cook according to package directions.

Meanwhile, heat the oil in a skillet over low to medium-high heat. Add the garlic and cook, stirring. Do not allow garlic to burn. Add the butter, and once it has melted, add the langostino, then the broccoli flowerettes. Add the lemon juice and a tablespoon or two of pasta water. Toss well. Serve with lemon zest, parsley, and cheese.