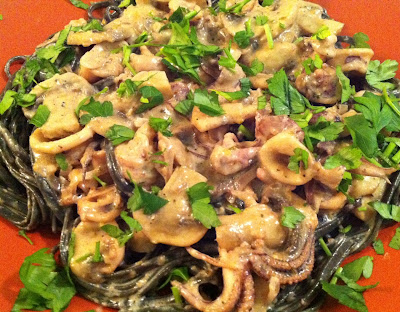 We ate pasta every night for two weeks when we visited Italy. Never got tired of it. Spaghetti in Italy is so unlike what we were brought up to believe this dish is. Never once did we have a heavy tomato sauce with meatballs. Instead, we found pasta in Italy to light, simple and creative—always skilfully prepared with only fresh ingredients and wonderfully delicious olive oil.

One of our favorite discoveries was Linguine al Nero di Seppia, pasta prepared from squid ink. As many variations of this exist as there are cities in Italy. We ate it in Rome, Tuscany and Venice, and each time proved to be interestingly different and delicious in it's own way.

A few weeks ago, I made a version using black caviar as a key ingredient. We were craving for it again, so I got everything together to make it last night. Everything except the caviar. Fuelled by hunger and tenacity, I went to 4 grocery stores after work in search of a simple jar lumpfish caviar. There was none to be found. I'll admit that caviar may not be on everyone's shopping list, but in Chicago I could readily find it in any supermarket. Not here. I guess Canadians don't eat fish eggs.

What follows is variation I made up on the fly since caviar was unavailable. Next time I'm in the states, I guess I'll have to load up on lumpfish to make my other recipe.

When water comes to a boil, add pasta and cook. When pasta is al dente, drain, and add to skillet with sauce and toss.

Serve with lemon zest and chopped parsley.
Posted by charles